Hopefully the Blogger problems I've been encountering have now been solved...this post has been hanging around for a long time!

Last week was a very busy one...Friday was entirely taken up with baking lots and lots of Mocha Roulades. I was asked to help with a wedding that a customer was catering...130 guests and this recipe was one of the bride's mother's specialities that the bride has been enjoying since her childhood....quite a daunting prospect! I created a sample a few weeks ago which was approved...so it was all systems go! The recipe worked very well, so I will pass it on to you...I think if I were making it for myself, I wouldn't use the cherry pie filling (!) but this was how the bride wanted it! Fresh raspberries would be wonderful I think...or even bananas, if you were going to eat it fairly soon after rolling.

In a bowl set over simmering water (or in a microwave if you're confident!) place the chocolate (broken into bits) water & coffee powder to melt. Stir a few times to make sure there are no lumps.

In a large bowl, whisk sugar and egg yolks until thick and creamy (I used an electric hand whisk for this) 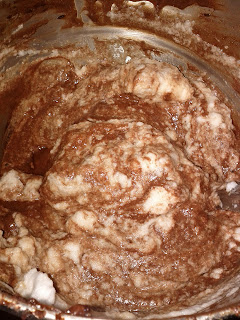 until all traces of white have disappeared.
Turn into prepared tin... 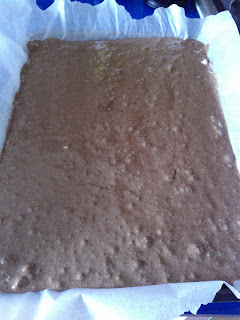 and bake for 20- 25 minutes until set and firm to the touch. It will look quite matte & dry on top when it's ready... 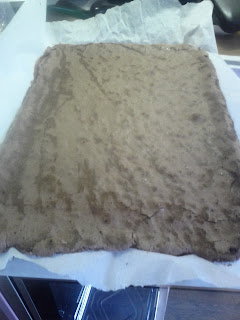 Wet a clean teatowel under the cold tap and wring out well until just damp. Lay over the hot cake and leave until completely cold (you can leave it overnight if you need to) I made so many, that after half an hour or so I replaced the towel with plastic wrap... 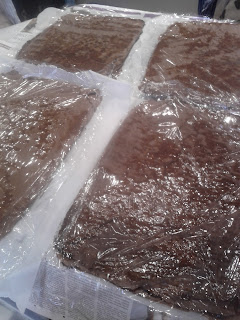 which worked just as well. As long as there is no exposure to the air, which will dry the base out and make it difficult to roll, all will be well!
When you're ready...have a serving dish to hand (something fairly flat, like a tray works best)...cover a fresh sheet of baking parchment with sieved icing sugar and invert the base onto that...then carefully peel away the original base paper (which will now be on top!) Whip 10floz/300ml double or whipping cream softly (not too stiff or it will be hard to spread) and spread evenly over the base (not quite to the edge) followed by fruit of your choice...or canned pie filling!! 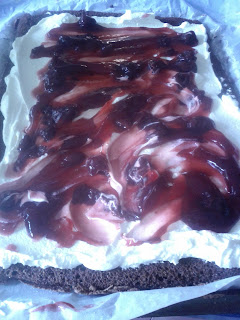 Using the parchment, (have the serving platter very nearby!) carefully roll up from the short edge as tightly as possible to form a bee-yoo-ti-ful roulade...hopefully you'll be able to transfer it to the plate! I found it best to have the last bit of the unrolled base just on the edge of the platter so that when I finished rolling, it just gently tipped onto it! 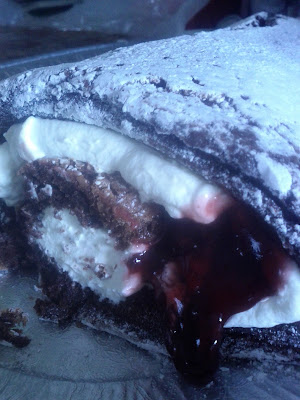 Anyway, after making so many I'm a real expert! And I must say that they were very straightforward and looked and smelled quite impressive - having no flour in the mixture was also great, as I'm always on the lookout for gluten-free recipes. This also made it more of a dessert rather than the cake that some roulades resemble!
Also at the bakery in recent days.... 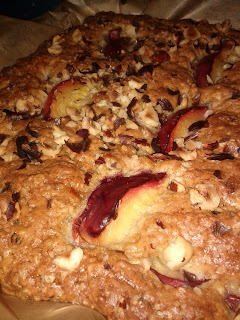 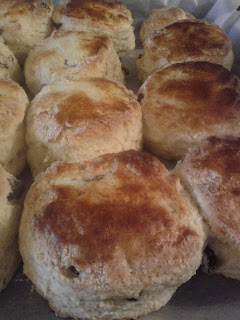 Buttermilk Raisin Scones...
and my personal favourite - Black Forest Cake, which is my take on the 1970's bistro classic. I find that the original (now usually found in freezer cabinets!) is often dry and oversweet...I like to think that my version is neither of these things! 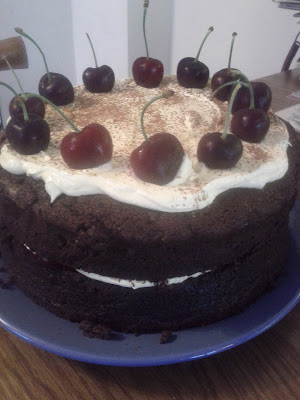 This morning is chilly and rainy...perfect baking weather! I'm just off to The Coffee Tree to deliver a fresh batch of Gooseberry Elderflower Muffins (and pick up a much needed coffee!) 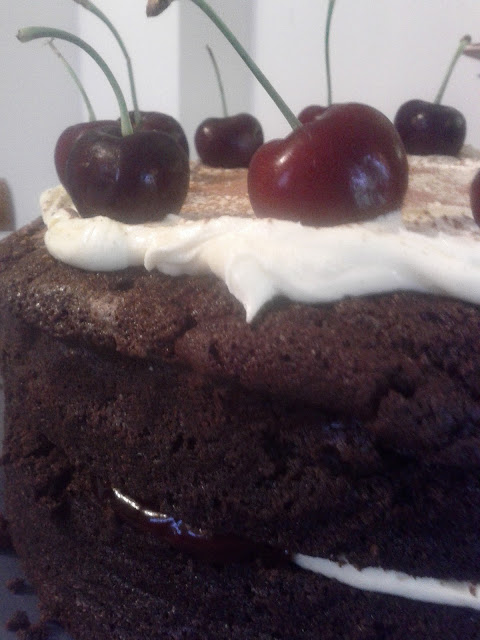 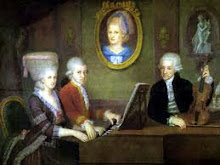 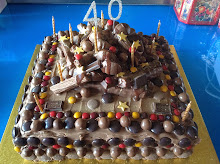 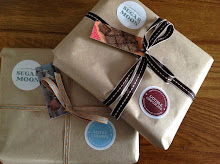 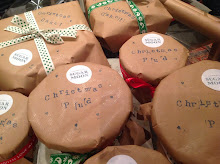